All About Sheep: The Good, The Baaa & The Famous 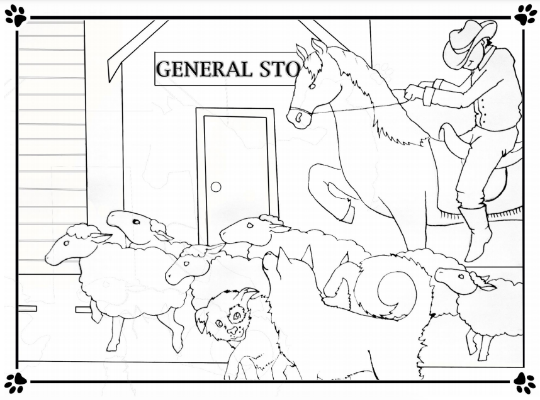 In chapter 4, Mo leaps to the side of the road and finds dozens, maybe even hundreds, of sheep traveling down the road, heading straight toward him at a fast pace.

What should he do? Should he simply watch them walk by? He never talked to sheep before. Would they be nice? If he waved hello, would anyone wave back? All he remembers is how his friends back home would sometimes describe bashful or shy animals or people as “sheepish”, and others who were followers as sheep.

Actually, sheep are not so shy. They’re highly social and intelligent animals. Besides protection from predators, another important reason they stay in groups (known as herds, flocks or mobs) is because of the strong social bonds they form with each other. They can sense different emotions from other sheep and gauge how they’re feeling, which is the basis for forming strong social relationships.

Like Mo and Finchy, there could be many things you may not know about these farm animals. Here’s 9 more facts about sheep:

The Most Famous Sheep (actually, a lamb)

It would be silly to share all the wonderful attributes of sheep without mentioning the most famous one of all. Have you ever heard the nursery rhyme “Mary Had a Little Lamb?” Probably. But did you know that it’s actually based on a true story?

Back in 1815, a nine year-old girl, Mary Elizabeth Sawyer, was helping her father with farm chores when they discovered a sickly newborn lamb in the sheep pen that had been abandoned by its mother. Mary wanted to keep the animal and nurse it back to health. After much begging, her father agreed.

The lamb’s health improved and followed Mary everywhere, even to school one day. Mary hid the lamb under her desk but it soon popped out of its hiding place. The teacher believed her classroom was no place for a lamb and shooed it outdoors, where the lamb waited for Mary until lunchtime, when she walked it home.

The following day, John Roulstone, a student in Mary’s class, wrote what is now the very famous nursery rhyme:

Mary had a little lamb; Its fleece was white as snow; And everywhere that Mary went, The lamb was sure to go. It followed her to school one day, Which was against the rule; It made the children laugh and play; To see a lamb at school. And so the teacher turned it out; But still it lingered near, And waited patiently about, Till Mary did appear.

Do you know something unusual about sheep? Or if you live on a farm or happen to have a pet sheep, email us about what makes your sheep so funny, different or amazing and we’ll publish it along with your name, age and name of your state!